“MadeInGermany”, the autonomous car designed and built by the AutoNOMOS Labs at Freie Universität Berlin, just returned from its first driverless road-show in the USA and Mexico. The car was flown first to Houston, from where it was driven to San Antonio for a series of tests at the South West Research Institute. Afterwards, it was transported to Mexico, where it was on display in Monterrey (Sept. 27 and 28), Mexico City (Sept 29 to October 8), and Guadalajara (Oct. 10 and 11). MadeInGermany was shown in these four cities navigating streets and highways in an autonomous way. A safety driver was always behind the steering wheel, ready to intervene, while a copilot sat at his side checking the status of the control computer. Two passengers could sit in the back seats.

The campus of the South West Research Institute in San Antonio was the first stop in our journey. MadeInGermany operates with the help of sensors such as a highly accurate GPS unit, laser scanners for distance measurements, radars for speed and distance measurements, as well as five video cameras which are used to find the lane’s markings and traffic lights. San Antonio was chosen for testing, so that the differential GPS services of the company Omnistar could be compared with the services offered in Germany. In that country a network of land stations provides GPS correction signals through cellular telephone links. We could determine that in San Antonio the mean GPS localization error, with our system, is of around one meter. From a previous visit in 2007, we had an RNDF (route network definition file) of the SWRI campus. It was possible to navigate the campus autonomously, obeying the stop signals and keeping the necessary distance to other cars.

Our next stop was the city of Monterrey, the third largest in Mexico. MadeInGermany was shown on Oct. 10 at the meeting of the automotive cluster of Nuevo León State, the second most industrialized state in the country. The next day the car was shown to the students at University of Monterrey, to the local TV stations, radio and some newspapers. The local press reported about the “car of the future” visiting Mexico.

Once in Mexico City, the first task was to test the accuracy of the Omnistar service. Not all of Mexico is covered by the Omnistar correction signals. In Mexico City reception was weak and the average localization error grew to around 2 meters. Under these circumstances, periodic offset corrections became unavoidable. We managed to implement those using checkpoints along the RNDF that could be recognized by the rest of the sensors.

In Mexico City the car was shown driving in the campus of Instituto Politécnico Nacional (IPN) on October 1st. The president of IPN, Dr. Yoloxóchilt Bustamante, was driven along a short route. The university’s own TV channel as well as printed media reported about the demo. On October 2nd, a reporter from TV Azteca, the second largest TV network in the country, rode with the car in the IPN campus and conducted an interview with the team members. The demo was broadcasted that night in all major cities across Mexico.

Undoubtedly, the highlight of the demos in Mexico was the visit that the MadeInGermany crew paid to the offices of the mayor of Mexico City, Mr. Marcelo Ebrard. The mayor step into the car in one of the busiest zones of Mexico City, Colonia Condesa, well-known for its narrow streets and residential flavor. MadeInGermany gave the mayor a small tour of Colonia Condesa. This was reported in the following days in national TV, radio, newspapers as well as in the online media. Hundreds of articles were written about this demo. The first cartoons ever of MadeInGermany appeared in the Mexican press due to this presentation.

Other universities and research centers were also visited: the Iberoamerican University, the Autonomous Technological Institute (ITAM), the National Autonomous University (UNAM), and the Center for Nuclear Research in the outskirts of Mexico City. MadeInGermany was also presented outside the residence of the German Ambassador to Mexico on Oct. 3rd, German Reunification Day.

MadeInGermany is the first autonomous car to ever have driven ever in Mexico. The car was not only able to navigate Colonia Condesa, the campus of Instituto Politécnico, but also the crowded Avenida Paseo de la Reforma (one of the main traffic arteries in Mexico City), the main city square (Zócalo), and the second level of the city highway (Periférico). Before driving in any part of the city, we drove manually collecting the necessary data for a city map. Afterwards, we used GPS information for navigation, but also video cameras to find the lane markings and laser sensors to keep the distance to other cars. GPS information alone would not have been sufficient to navigate autonomously in Mexico City due to the narrow traffic lanes and due to the reduced accuracy of the differential GPS corrections. The visit to Mexico concluded on Oct. 10 and 11 at the University of Guadalajara, the second largest in Mexico. Here the AutoNOMOS team gave a talk about our autonomous car, and the vehicle was shown afterwards to the press. 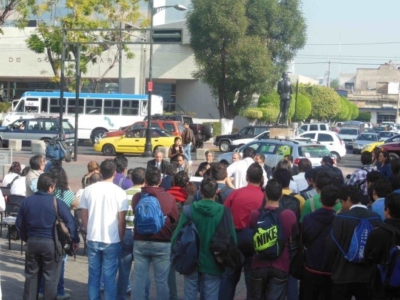 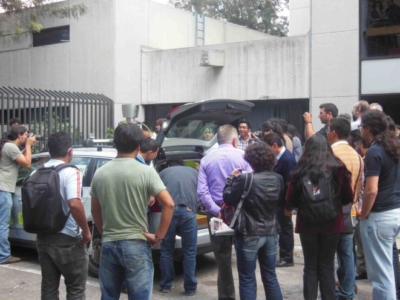 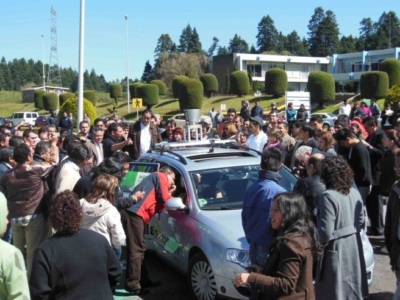 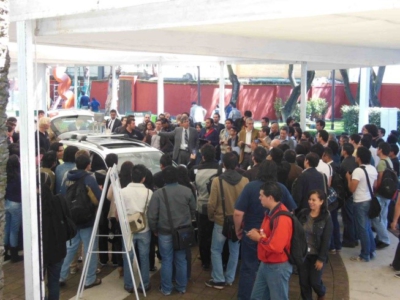 Before delivering the car in Houston to the cargo company, MadeInGermany was shown at Rice University. Researchers and students could see the car and ask questions about its performance.

The results of the visit were reported in literally hundreds of press articles in the Spanish speaking world. We are in the process of collecting links to this material.