Konrad Zuse is considered the father of the computer in Germany. I met Konrad Zuse several times in 1993 and 1994 and he gave me the first documents and diagrams of the Z3. I started collecting Zuse’s papers and diagrams in a systematic way in 1998. Some of the documents were typewritten and others were scanned in PDF format. The result is the Konrad Zuse Internet Archive, present on the Internet since 1999. The archive contains most of the important documents and circuit diagrams produced by Zuse and his company between 1936 and 1995. The archive also contains simulations of some of the machines, especially the Z3, which was the first programmable computer in the world when it was unveiled in 1941. The simulations were  written in Java.

The archive contains pictures of hardware reconstructions, most notably the Z3 and its addition unit. The number of personal visits to the archive has reached around 100,000 per year. The Internet visitors are from Germany and several other countries. 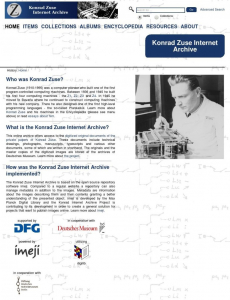 The archive contains many documents and patents from Zuse. Regarding the Z3 it contains:

The archive also contains two important pieces of software. One of them is  an editor and interpreter for Plankalkül, the high-level programming language designed by Zuse in 1945. No compiler or interpreter was available until 2000 when our system was put on the network. The other is our implementation of Konrad Zuse’s 1945 chess program in Java. It was the first real chess program and the interested user can experiment with it.